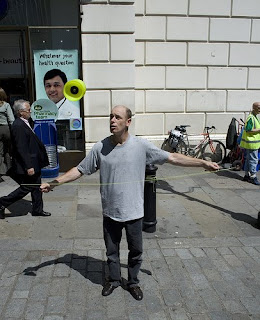 a welshman grown up in the inner city of london with cockney accent. way back in the day he was a mod, complete with clothes, scooters and lingo. he's a rough but educated guy.

great friend to have, pulled me outta many a scrape.

started performing with a diablo many years ago in italy, he learned from an italian master there and 2 of his english mates ed and adi, he got so good so soon when he went to greece next he made personality of the week on all the t.v. stations and newspapers.

he performed since 1998 in london and is currently in amsterdam workin the sidewalks there.

the unique thing about him is his skill at a sidewalk show, like all diablo or jugglers he can do big shows but what makes him so unique is his absolute mastery of a sidewalk show.

watching this next clip you can see him working the crowd building for a bigger show.

i have shared many a pitch and a squat or two with him for a while. along with his obvoius skills, he is also a master mechanic, and can work on anything inna building.

he is also an inventor. if you are a diablo worker and you are lucky enough to catch his act live one day you may notice that he is doing some unique moves that couldn't usually be performed.....it's the sticks they are a special design, they are tubes so the strings can be pulled in and out to adjust the diablo as it spins.he does some really unique cat's cradle type effects by pulling the sticks in then letting them drop and untangle magically yet still keeping the diablo on the spin.

anyway he makes em and sells em, ask him about it and he might be able to direct you to the people he's got selling them.

here's another of him working a smaller sidewalk show.

in his younger days he was quite the acrobat.

he's a true sidewalk performer and as street wise as they come. he is a bit of a legend in london and knows all the vetran performers there.

my pal TAF
Posted by Jimmy Talksalot at 11:50 PM

Look At My Books

Or Learn How To Street Perform For Free

At My Blog For Learning Busking.

Jimmy Talksalot
I am a Sidewalk Performer from New Orleans. I travel up and down sidewalks all over the world, doing my show for whatever people feel they should pay me. My show is fast moving, fast hands, fast talking, bits of funny business, and old time amusements. I am also a writer, a lover of music, culture, history, God and man.